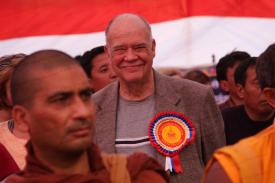 Gene Smith was born in Utah and raised a Mormon. After studying science and anthropology, Smith relies on interest and ability in obscure languages to avoid the Vietnam era draft. While studying Sanskrit and Tibetan at the University of Washington, he takes up Tibetan Buddhism as an academic pursuit and offers to help Tibetan refugees – brought to the U.S. to teach – to assimilate into American life. He is assigned to live with the family of Deshung Rinpoche, a member of the Phuntsok Palace family and one of the most learned lamas to escape Tibet. Smith teaches English to Deshung and Deshung teaches Smith about Tibetan culture and Buddhism.  Deshung urges his eager student to travel to Europe and India to meet other lamas and find more texts to study. A Ford Foundation study grant funds Gene’s trip to Southeast Asia.

With letters of introduction from Deshung Rinpoche, Smith meets many Tibetan refugees as he travels through India, Bhutan and Nepal. In India, he studies with noted lamas and teachers and, in 1968, starts working at the Library of Congress field office in New Delhi.  Smith’s home becomes an intellectual haven for scholars, writers, government officials and Buddhists of all nationalities; discussion topics include how to save the riches of Tibetan literature.  Smith writes essays about the Buddhist traditions and establishes a network for collecting and reprinting important Tibetan texts – a network that spawns many of the world’s leading religious leaders and scholars in Asian Studies. A preservation program takes shape.

Smith is in possession of the last known Tibetan official handwritten catalogue of documents and their locations in Tibet.  It is used to help identify where monks may have hidden their precious library for safety and is key to the willingness of Tibetans in India to risk the two-month recovery mission by going back into Tibet to retrieve texts.

This program becomes known as “Food for Peace” under the Eisenhower and Kennedy administrations. But funds owed to the U.S. are mounting and blocked currency, such as the Indian Rupee, could not be used for repayment. Because monies had to be spent within the indebted countries to help repay the United States, PL480 is amended to create a kind of “Food for Thought” program.   Agencies such as the Library of Congress are directed to purchase publications for the U.S. The catch is that the works must have been printed within the last two years. Smith has a better idea, finding precedent to use PL480 funds to induce wary exiled Tibetans in the Diaspora to expose and then print their hidden woodblocks, faded texts and crumbling manuscripts, and then offering to purchase their enhanced copies.

Smith and his colleagues use the funds to make copies of rare and important Tibetan texts that have been smuggled out of Tibet by exiles of the four main Tibetan Buddhist lineages. He also befriends lamas from the little-known Bon monastic sect – the first religion of Tibet – and assists them with their own preservation efforts. The copies are sent to North America and installed in the libraries of more than 20 universities. These and other texts are also made available to Tibetan monks. Approximately 8,000 Tibetan volumes are acquired under the PL 480 program.

Smith also sends back his own notes and essays to be copied and preserved. His commentaries put each manuscript in historical, religious and cultural context for Western scholars struggling to understand the Dharma.The walls of Smith’s home in Delhi become lined with thousands of Tibetan books, even the most obscure of which he can locate immediately amid stacks of texts.

For 20 years Smith uncovers lost Tibetan texts and helps shape the PL480 initiative so that it more directly funds Library of Congress efforts worldwide. When Smith is transferred to Jakarta and Cairo in the late 1980s, PL480 is no longer available, but his growing network continues the mission he initiated in Asia. When more Tibetan Buddhist texts begin appearing in China after the revolution, Smith uses his contacts to acquire those as well, in spite of the dangers involved.