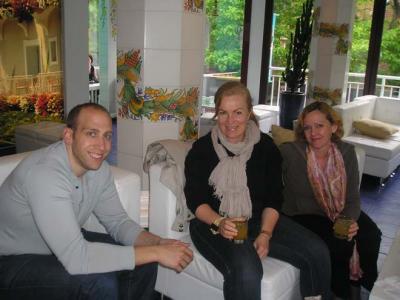 PFS held their first Happy Hour not related to a specific film screening. It was just a chance for their members, attendees and guests to meet, drink and chat (hopefully about movies, but not necessarily), in the hospitably relaxed beauty of Positano Coast. (Truly, one of my favorite restaurants in the City).

Best of all, if you attended the happy hour with a project to pitch/promote, I have the power as PFS Blog Contributor to feature your film on both their site and here on Tinsel & Tine.

In the shadow of the foreboding Himalayas, a small band stands on a ledge. Their lives, their families, and their history depend on a successful escape. Hidden securely in their packs is documentation of a culture that is heading for extinction. Carrying centuries of philosophy, religion, science and art, they cling to a precipice, inching toward the future.

Can one man, a Mormon from Utah, who would do everything possible to keep from going to war... start a quiet revolution against the obliteration of a culture not his own?