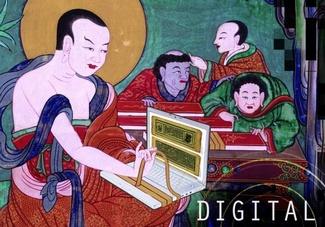 Here's your daily dose of an indie film in progress; at the end of the week, you'll have the chance to vote for your favorite.
In the meantime: Is this a movie you’d want to see? Tell us in the comments.
"Digital Dharma"
Tweetable Logline:
Amid political turmoil, pacifist E. Gene Smith, a Mormon from Utah, triggers an international movement to save Tibetan Buddhism.
Elevator Pitch:
Digital Dharma is the story of E. Gene Smith, the man who saved Tibetan Buddhism. This feature-length documentary uncovers Smith’s 50-year journey with renowned scholars, lamas and laypeople as they struggle to find, preserve and digitize more than 20,000 volumes of ancient Tibetan text.
Crossing multiple borders – geographic, political and philosophical – Digital Dharma is an epic chronicle of a cultural rescue and how one man’s mission became the catalyst for an international movement to provide free access to the story of a people and share their wisdom with the world.
Production Team:
Director/Producer: Dafna Yachin
Writers: Dafna Yachin, Arthur Fischman, Timothy Gates
Editor: Timothy Gates
Cinematographer: Wade Muller
Art Director: Andrea Bitai
About the Production:
"I met Gene Smith while directing another documentary short in 2006. He was extraordinarily humble, unassuming and an unlikely lead character. It was not until a year passed that I was made fully aware of his 50-year mission and of the importance of the text preservation efforts of this gentle giant of diplomacy and now iconic figure in American/Asian history.
"With this film, I want viewers to quickly move from asking why to wanting to learn how: how the mission will be accomplished, and perhaps even how they might become agents for accomplishing such a purpose in their own lives." -- Dafna Yachin
Current Status:
Post-production.
For more information and to support this film:
Kickstarter Page
Film Website
Be sure to check out our curated Kickstarter page for more information on projects we think you should check out.
If you have an in-the-works project and you'd like to be profiled in an upcoming Project of the Day column, submit yourself by filling out this form!