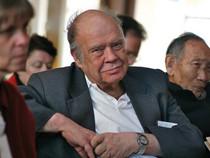 "Digital Dharma," a new documentary that got its "special sneak preview" at the 18th annual Sedona Film Festival in Sedona, Ariz., is about a Mormon from Utah who gave a half-century of his life to save the ancient texts of an endangered culture on the other side of the world.

"Somehow he felt it was his job to save the culture," says the documentary's director, writer and producer, Dafna Yachin, of Smith's efforts to the gather ancient writings of Sanskrit and Tibetan texts threatened by events in Tibet in the late 20th and early 21st centuries.

Films about antiquarians ambling about in Indian bookstores don't figure to be the stuff of drama, but "Digital Dharma" is just that sort of documentary. It weaves a complex story about Smith's dedication to collect delicate Tibetan Buddhist books printed on single sheets of rice paper, many of these texts spread across the planet after the attempts by the Maoist revolution to destroy the society tucked into the shadows and tucked into brilliant heights of the Himalayas of western China.

Eventually, he was able to get incredible amounts of this text digitized and made available to the new e-century: Hence, the title, "Digital Dharma."

"This movie is about Gene's journey," Yachin says. "He passed away suddenly last year. He lived in a hovel in New York, with piles of texts in his home. He never really got the notoriety he deserved until he passed away."

The documentary is a real globetrotter: Going from Tibet to India to Tibet and China to all kinds of places in Southeast Asia. The story as rendered by Yachin is a tangled weave through recent Tibetan history, and as an effort in quiet, but focused heroism, an incredibly unheralded tale about what one man can do when in Katmandu.