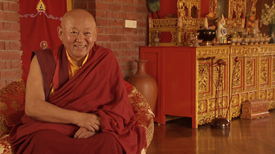 The 37th throne holder of the Drikung Kagyu Lineage and head lama of the Kagyu tradition. Born in Lhasa, Tibet, he was recognized as the 7th reincarnation of the Chetsang Ripoche at an early age, and began his formal education under the auspices of his spiritual instructors, Tritsab Gyabra Rinpoche and Ayang Thubten Rinpoche, shortly thereafter.

H.H. Drikung Chetsang has dedicated his life to the preservation of Tibetan Buddhist culture, and in 2003 and 2005, he oversaw the construction of Songsten Library and the Kagyu College, respectively, in Dehra Dun, India.