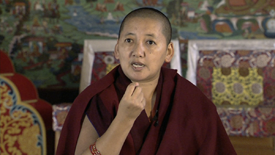 daughter of H.H. Mindrolling Trichen, she is one of the few female lamas, as well as an author and beloved teacher. She comes from the Jetsünma line, famous for its history of great female masters. She has taught extensively in Asia, Europe, and North America since 1992, and has amassed a large following. Rinpoche founded the Samten Tse Retreat Center in Mussoorie, India in 1993, with the stated intent of bringing together scholars and lay practitioners from the East and West.
Khandro also has a large following in the United States and on Facebook.  She is a representative of the younger generation who is helping to promote the importance of preservation and continue the work of her recently deceased father, the head of the Nyingma tradition.